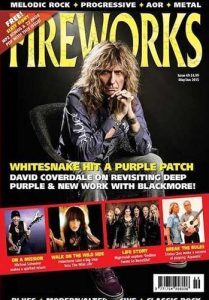 After a little back and forth of how he [Slama] maintains such frequent high quality of albums, and how the album came to be, the conversation turned to the other contributors of the album and Paul Sabu‘s name came up.

Paul knows exactly what I want (apart from women, money and drugs) so he knows perfectly well what to do to please me in term of arrangements, ideas or sounds. We discussed a lot the direction I wanted to give to ‘Return To L.A’ and after giving him one million dollars he thought all my ideas were pure genius ha! ha! Paul “The Legend” Sabu has worked with everybody from Shania Twain to David Bowie so he can adapt easily, that’s what makes him a top musician & producer.

Thanks Frédéric Slama for the shout out!

It’s certainly a good article by Fireworks Magazine Online on Slama and Return To L.A. to read. Be sure to check out the rest of it by clicking on Interview with Frédéric Slama’s AOR.

Also, feel free to listen to a sampler of AOR’s “Return To L.A.” with Frédéric Slama, Tommy Denander, and Paul Sabu.

Scroll back to top